I've known Karen MacLeod for many years now and have always been impressed by her writing. She usually writes historical fiction so this contemporary romance is a departure in genre though not so much in style which, as ever, is lucid and compact. Here she tells us how Garlands and Shadows came into being: 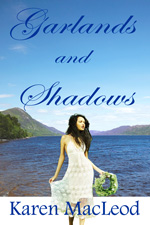 Garlands and Shadows evolved from my earliest attempt at a novel, Castle In A Paperweight, not in terms of story (it was not a straight romance) but in terms of location and several of the characters. It did not have a happy ending – I was young, and didn’t really understand that people need to escape from the world, not find more gloom in it.

It got lots of favourable comments  – I particularly appreciated Allan Massie recommending it to Canongate and Carol Manderson at Century Hutchinson who took the trouble to write “A powerful novel – good luck” on the official typed rejection card  - but no takers. So it turned into a sequel called The Beaufort Weekend, which had a bittersweet ending (slight improvement on gloom) but which I ended up destroying (unlike Paperweight, which, being my first baby, I could not quite bear to destroy).

A long time later, I started Garlands and Shadows with two completely new principal characters, Maura and Jaime, and a happy ending. It is not a sequel to the first two versions, since its past is not their present. But I loved the Highlands, working in several hotels up there as a student, and I think I wanted to write about some of the characters again, since they never quite left me, and give them happiness this time.

Karen MacLeod works in an office in Edinburgh, not far from the Castle and Gardens. In her own time she writes – compulsively. A Glasgow University history graduate, she has concentrated mostly on historical fiction; an early novel of the Tudor period has now blossomed into a trilogy. This new novel, Garlands and Shadows, a romance set in the Scottish Highlands, is both a departure and a return to her earliest writing.

Karen’s MacLeod ancestors lived on the west coast of Lewis – the westernmost edge of Europe, three miles from the Bronze Age standing stones of Callanish. One of her great-grandfathers worked on Lord Lovat’s estate at Beauly, Invernessshire. A great grandmother left Ireland as a child for Glasgow during the potato famine and the family of her MacIntosh great-grandmother was displaced from Strathnaver in Sutherland during the Clearances. There’s a lot of  material there – which may yet be mined.

Garlands and Shadows is available for Kindle at Amazon.co.uk; Amazon.com;  Amazon.de; and in all ereader formats at Smashwords.com

It will soon also be available at Barnes & Noble, Kobo and the Apple Bookstore.
Posted by Barbara Scott Emmett at 10:54