Mig-23 Broke my Heart: The Story Behind the Story

Award winning writer Andrew Dawson tells us how a novel sprang into being and wouldn't let go.

Mig-23 Broke my Heart: The Story Behind the Story
by Andrew Dawson 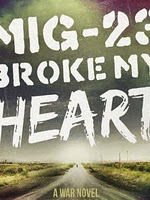 When I was nineteen, an idea for a story popped into my head and made itself at home. I won’t go into details about what it was about, but I will say that I sat down and spent about three weeks (a lifetime back then) typing out a novel that possibly violated a few rules of grammar and almost certainly made no sense. As soon as I was finished, I hit ‘print’ on the keyboard and then buried the manuscript in my bottom drawer. It was enough for me to know that I could do it, even if the result wasn’t all that great. I then went outside and got on with the rest of my life.
Fast-forward eight years and I enrolled on Northumbria University’s Creative Writing MA. By that time I had studied a couple of things, worked as an advertising copywriter and written a few short plays that had been produced. I was ready to tackle another novel.
MiG-23 Broke my Heart started out as a single sentence: ‘Thomas was bored.’ I didn’t know who Thomas was or why he was bored. I liked his name though, because it reminded me of the biblical doubter. So, I gave my Thomas a Bible. I also put him on the border between Angola and Namibia in 1988, because that was the worst situation I could imagine. From my background in writing for theatre, I knew that there was more satisfaction to be had from creating conflict than in describing days out at the beach.
I grew up in South Africa in the 1980s, with the shame of apartheid thick in the air and the spectre of military conscription hanging over my head. It was only natural that my subconscious would drag me back there.
In Britain, on my creative writing course, I wrote the first few pages of what would become my first ‘proper’ novel. I quickly realised that I wasn’t just drawing on my own experiences, but on tales told to me by older friends and cousins who had been called up to fight for the indefensible South African Defence Force. These memories weren’t enough though and I had to dig deeper. I scoured the internet and bought every book I could about the so-called ‘Border War’ between South Africa and its neighbours. Even though the story of Thomas is a kind of allegorical love story, I wanted to make sure that it fitted into its historical context. I wanted to do it properly.
Eventually, I finished the novel and submitted it to a few agents and publishers. The feedback was favourable, which I’ve heard is rare from a first approach (I now know that it’s rare to hear back at all), but there were no takers. No-one, apparently, wants to read about a forgotten war in an unfashionable part of the world.
I was furious. To spite them all, I went and wrote an even less accessible novel. After that, I wrote another book, without worrying who would read it, because I had got into the habit of writing prose. The habit became an addiction and I’ve now completed five novels in various genres.
Winning a Northern Promise Award from New Writing North in 2010 gave me the confidence to see myself as a kind of semi-professional (I approach my work professionally, but am only semi-successful). It also led me to reassess the manuscripts sitting in cold storage in my hard-drive.
MiG-23 Broke my Heart, I decided, would be perfect for Kindle. It wasn’t the kind of thing that would ever be picked up by a mainstream publisher, but that didn’t mean that it was a ‘bad’ book. Somewhere out there, it had an audience – at least, that’s what I told myself. I also thought that it would be creatively fulfilling to produce something tangible. And it has been.
After editing the text, hiring a professional to give it a once-over and asking a friend to help with the cover design, I uploaded the book to Amazon. There was no category for allegorical love stories set in obscure African conflicts, so I had to make do with filing it under the ‘War’ and ‘Adventure’ sections. Any writer will tell you what a nightmare it is describing their own book, and I think I fluffed the description bit. But, generally, I’m happy with how the whole thing turned out.
I don’t, however, have any plans for releasing the novel I wrote when I was nineteen. That one stays in the bottom drawer.
~
MiG-23 Broke my Heart is available for Kindle on amazon.co.uk and amazon.com; and for all formats at smashwords.com

Originally from South Africa, Andrew Dawson lives in Gateshead, in the North East of England. You can find links to some of his short stories at www.akdawson.co.uk
Posted by Barbara Scott Emmett at 13:16