October 1854 - births of Wilde and Rimbaud

October 1854 was a good month for literature – and for future scandal.

On the 16th one Oscar Fingal O’Flaherty Wilde entered the world at 21 Westland Row, Dublin; four days later, on the 20th October, Jean-Nicolas-Arthur Rimbaud was born above a bookshop in the Rue Napoleon, Charleville, northern France.


Both were to have explosive love affaires which were distorted mirror images of each other. Maybe there was something in the stars that October.

Everyone knows about Oscar and Bosie – Lord Alfred Douglas. He was a poet in his own right, Bosie, though not a writer of the magnitude of either Oscar or Rimbaud; he did however coin the phrase ‘The love that dare not speak its name’, which comes from his poem Two Loves. History remembers Douglas as the man who helped ruin Oscar Wilde.


The story of Rimbaud and Verlaine is perhaps not so well-known. Rimbaud, the almost exact contemporary of Wilde was the one who did the ruining in their relationship.

Paul Verlaine was a respected poet and a married man when the 17-year-old Rimbaud got his claws in him. 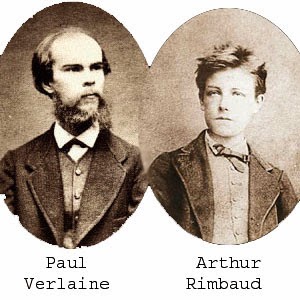 Not that Verlaine did much to resist his degradation at the hands of his protégé; he entered into the spirit of things by setting fire to his wife and throwing his infant son against the wall.


Rimbaud matured earlier than Wilde. While Oscar was amusing his friends at Trinity College, Dublin, Rimbaud was well on in his career as a ne’er-do-well. He wrote most of his unique brand of poetry between the ages of 16 and 20.

By the time Wilde went up to Oxford in 1874, Rimbaud was becoming disgusted with his way of life. He stopped writing poetry when he was about 21, before Wilde really got started.


Rimbaud’s relationship with Verlaine was probably more violent than Oscar and Bosie’s. Bosie was a spoilt pretty boy; Rimbaud was a devil in angel’s form according to those who knew him in Paris. He found it entertaining to stab his lover in the palms and jump out at him in alleyways on dark nights.

The insults culminated in an episode involving a herring – Rimbaud spotting Verlaine coming up Royal College Street (formerly Great College Street), London carrying the aforesaid fish shouted out that he looked ridiculous (only in choicer words). Verlaine took the huff, as well he might, and left.


Rimbaud followed him to Brussels where further altercations took place and this time the boy wonder threatened to leave. Armed with a revolver purchased at the Galeries Hubert, Verlaine took a couple of pot shots at him to prevent his getaway. One bullet hit Rimbaud in the wrist.


Verlaine was sentenced to two years in prison – after suffering various indignities to his person as the authorities investigated the relationship between the pair.


Oscar also did two years – with hard labour – and his losses were probably more heartfelt than Verlaine’s. Verlaine’s wife had already given up on him and refused to allow him to see his son again, whereas Constance, I think, may have stayed with Oscar if the pressures of society had not been so great.

Two sad tales with similar outcomes – though Rimbaud and Verlaine’s version had more than a touch of farce to it.

Well, Rimbaud did say Life is a farce we are all forced to endure.

Delirium: The Rimbaud Delusion is available as an ebook from various online stores and the paperback will be launched on Rimbaud's birthday, 20th October 2014.

Posted by Barbara Scott Emmett at 15:25