Today, 20th October, is the birthday of Jean-Nicolas Arthur Rimbaud. He was born in Charleville, France in 1854 and wrote astonishing poetry between the ages of around 16 and 21. He died aged 37 after living for many years in Africa as a trader. 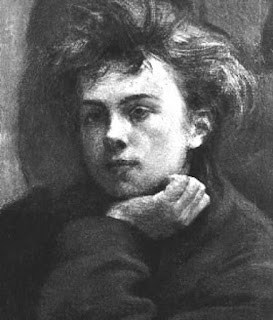 I first became interested in Rimbaud in 1973 when I was a student at University College London. One day I wandered across the grand foyer where Jeremy Bentham sits and stopped to look at a display of letters and photographs. There I learned for the first time about the relationship of Rimbaud and Verlaine and, in particular, their time in London living in Great College Street, Camden in 1873.

Even though I'd never read a word of his poetry, something about Rimbaud hooked me and I've been fascinated by him ever since.

My current work in progress DELIRIUM: THE RIMBAUD DELUSION (now complete) is about a woman obsessed with Rimbaud (well, they say write what you know!). Andrea becomes embroiled with a Magician and his young acolyte while visiting Charleville for the 150th anniversary of the poet's birth. This odd pair claim to have rediscovered Rimbaud's lost manuscript, La Chasse Spirituelle.

The novel uses a variety of voices and devices to explore Andrea's gradual breakdown and tell the story of the whereabouts of the missing manuscript from 1872, when it was last seen, to 2004 when the novel is set.

Here is an extract from the early part of the novel:


An extraordinary evening! Today there arrived from the north the most astonishing young poet called Arthur Rimbaud. Maman and I had awaited his arrival with some anticipation-the verses he sent to Paul were most unusual and we all had high hopes of him.
How those hopes were dashed! M. Rimbaud is not at all the elegant young man of our imagination. He is an unkempt youth, more child than man, though he is not much younger than I-seventeen or thereabouts. Maman and I were greatly surprised by his untidy appearance, his clothes being crumpled and somewhat outgrown-and he has brought with him no luggage whatsoever!
Despite all our efforts to engage our guest in conversation, M. Rimbaud would not be drawn, either on his future plans or his theories of poetry. Maman and I are quite worn out with the strain of fulfilling our social obligations.
In contrast, my husband is perfectly taken with him. Paul is of the opinion that this vagabond poet is a genius. ‘He will shake up the salons of Paris, Mathilde!’ he cried, when I remarked upon M. Rimbaud’s lack of manners at the dinner table. ‘He will make those stuffed shirts sit up and take notice. Yes, and your stuffed shirt of a father too, when he gets back.’
I dread to think what dear Papa will make of our strange house guest. I fear he will not allow him to remain here, once he returns from his hunting trip.
In the meantime, I become more indisposed each day as I await my happy event.


rue de Campagne
Paris-shit
1871
My cock nestles against Paul’s arse, languid after love. His breathing-rhythmic, slight snore-hasn’t begun to annoy me yet. I am lost in the deserts of love, still wandering amiably in those dreamlike states: fondness, tenderness, tristesse.
He stirs, groans, rolls on his back. Speaks broken words, half-formed thoughts. Perhaps I catch my name. I listen for it, ready to arm myself, the better to taunt him later. You dream of me. You need me more than I need you.
Putting my ear to his lips, I listen, but he is silent apart from the rasp of his boozy breath.
Sniggering, I pinch his nose and count: one, two, three-
He gasps, snorts, wakes. Wha-? What the-?
I’m astride him now, pummelling him, beating a rat-a-tattoo on his chest.
Ow- Ow- Stoppit! He grabs my wrists, throws me off. He is still the stronger of us-but only just. And now he’s on top of me, holding me down, snarling in my face. Cunt! Arsehole! Prick! And I’m laughing back at him, laughing at the way the rage boils up in him, rouging his cheeks; the way the spit drools from his mouth, the snot slicks his moustache.
I reach up, suck up his dribble, let my lips climb up the string of mucus to his mouth. Till we’re biting, teeth against teeth; clashing, snuffling, snarling, hearts pounding, cocks hard.
And off we go again. Carnival ride.
~ ~ ~
ANDREA
Charleville, France
August 2004


‘Deux pressions, s’il vous plait.’
The Café de l’Univers was cool and shady. It was also empty. The bored waitress stirred from her lethargy when I ordered beers from the tap.
Rimboy swung himself into one of the booths ranked along the right side of the room. I slid onto the red leatherette bench opposite him, keeping the table between us. Our knees brushed as we settled into our seats.
Glancing around, I tried to imagine the café as it was in Rimbaud’s day. Though it was now a different building, I fancied I could hear echoes of the poet’s pals—Delahaye, Labarrière, Charles Bretagne—all discussing Arthur’s latest exploits, and laughing. It wouldn’t have been like this then, with these fifties style benches. Then, there would have been round tables and bentwood chairs. Pipesmoke and carafes. Perhaps I sat in the exact space Rimbaud once sat in, the molecules of my body mingling with the memory of his.
‘When I read his poetry,’ I said, my voice smoky with emotion, ‘I curl up inside.’
Rimboy nodded, casing the room with his indolent blue gaze.
‘When I read about his life, I feel that clutch in the pit of my stomach. In my groin. It’s almost sexual, what I feel.’ I sat back as the waitress put a glass in front of me. ‘Not for the man himself, I don’t mean that. I mean for the idea of him. The myth of him. The-’
I spread my hands and appealed to him for understanding. He wrinkled his nose and the strabismus made a fleeting reappearance. Even squinting, he was cute.
I shook my head. ‘Oh, I don’t know what I’m trying to say. I only know how I respond to him.’ I ran my finger through the condensation on my glass. ‘You feel something similar, I imagine?’
‘I am Rimbaud,’ he said.
He swilled most of his beer down in one gulp. I savoured a long draught of my own. He was much deeper into the fantasy than I was.
‘So you believe in the transmigration of souls then?’ I said.
‘Hnh?’
‘The survival of the soul. Reincarnation.’
He contemplated me for a moment. ‘Naturally I believe in it. I’m here aren’t I?’
‘Do you think the soul reincarnates immediately after death?’ I went on. ‘Or within forty-nine days like the Buddhists say?’
He shrugged. ‘Maybe it varies. I don’t know.’
‘Well, it’s over a hundred years since Rimbaud died. Where’s his soul been until now? Where have you been? Or rather, who have you been until now?
He tapped the rim of his glass with his nail. ‘I’ve been a lot of people. Before I was Rimbaud, I was Mozart. Did you know that?’
That took me by surprise. ‘No, I didn’t know that,’ I said, ‘but I suppose I can see a connection. Precocious genius, scatological humour.’ I eyed him up and down. There was more to this young man than I’d thought. ‘I always wondered,’ I said. ‘When you were Rimbaud—did you return to the Catholic Church on your deathbed as some people say?’
He snorted. ‘I’m a pagan now and I was a pagan then. Always and forever.’
All the time we sat there I was twitching in my seat. I wanted to have a look at the wad of poetry. I needed to see it, to find out if it was genuine. Truth be told, I wanted it to be the real thing. I’d probably be disappointed when it turned out to be another aspect of his fantasy. But I had to make sure.
‘Let’s have a look at the poem then.’ I stuck out my hand.
Best forget the dalliance. Concentrate on the manuscript.
He hesitated. Then, disentangling the sheaf of creased paper from his pocket, he passed it to me. I smoothed the top sheet and started to read.
‘La Chasse Spirituelle. The Spiritual Hunt.’
Now, I wouldn’t call myself a Rimbaud scholar in the academic sense, but I’ve read enough of the man to get a flavour of his work. I’ve pored over his poetry both in my cups and sober, with lovers and without. I’ve read him in sorrow and I’ve read him with joy. I have internalised him. So when the opening lines of the poem didn’t immediately shriek forgery, I succumbed to the frisson of excitement that tingled through me. This could be the real thing. A wet dream coming true.
Maybe.

Posted by Barbara Scott Emmett at 12:01