It's been a while since I posted on my blog. My excuse is that I've been busy trying to finish my Rimbaud novel.  I keep saying it's nearly done but I still haven't finished yet.

Now called DELIRIUM, it's up to around 105,000 words - which makes it the longest book I've ever written.

It really is getting close to completion now - just a bit more tweaking and rearranging and a couple more bits to write, then a complete read-through and overhaul and that's it. Doesn't sound like much, eh?

I had hoped to have it finished by the end of 2012 but my new deadline is Easter.  When is Easter again? Not too far away, so I'd better get on with it.

Here's a mock-up of a draft of an idea for a potential cover in the meantime - though it's unlikely to be used for the final product. 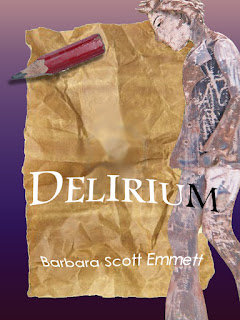 Posted by Barbara Scott Emmett at 14:03

I love this idea, Barbara... just not too sure about the purple background...; though I'm not a purple girl!
BTW, can't wait to read the whole thing!

Thanks Liza - there will no doubt be many variations on the cover - I might even call in a professional!