NOT RAVING BUT DROWNING - An Excerpt

His fingers rake through the shingle; the grit of a thousand years impacts beneath his terrified, clawing nails. The undertow of the same merciless wave that pitched him off his feet, drags him scrabbling down the beach. Sand and shell scour his abdomen and shred the skin from his chest. He panics and flails, but she doesn’t see him. She dances on the sand with the others, swaying to the thudding rhythmic music, arms waving above her head, like seaweed floating in a current.
He lurches up, a creature from the deeps, and blows a spume of salt water, but his pedalling feet find
no purchase and he plunges backwards into the swell. He rises again, a flying fish, a leaping dolphin; he wills himself up into the air, but founders, exhausted, in the roiling surf. Stomach full of brine, lungs burning from lack of air, he goes down for the third time. The warm dark ocean caresses him, soothes him. He sinks slowly, hair rising from his head like tentacles, bubbles hiccoughing from his lips, and soon all his fear has gone. 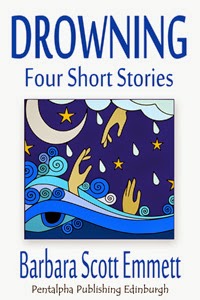 He is a foetus again, floating in amniotic fluid, womb-cossetted, drifting in a pinkish dream to the sound of the ocean’s heartbeat.
Suddenly, the waters burst and he is thrust, with unseemly haste, into a world of bright lights and loud noises. He sucks and slavers, wet red lips searching for a nipple. Saliva drools from his tiny wailing mouth. His fists beat a milkswollen breast.
And now wet nappies chafe between his legs; uric acid stings his rash-red skin. Angry tears leak from tiny squeezed-tight eyelids. Instantly, he tumbles into a warm bath afroth with suds; flotillas of yellow ducks and bright red boats bob in the swell created by his chubby thrashing legs.
At once the boats turn to paper, soggy in the algae of the litter-strewn pond. His socks and shoes are sodden, his bare knees muddy, but his heart is free. Then the thick green sludge of the park lake turns turquoise and he stands, toes curling over the cold, tiled edge of the swimming pool, ready to dive. On the count of three. One Two Three! The chilly chlorinated water bloats his nylon trunks, bubbles up around him, and shrivels his boy’s penis to a curled pink shrimp.