A short excerpt from Ebook THE LAND BEYOND GOODBYE

‘Righty-ho,’ said Rossi. ‘Let’s get on with it.’ He sat down and began to pull papers out of the briefcase, spreading them across the wooden table. ‘She’s led us a right dance, this one.’
She? thought Jess, Does he mean me? She glanced at Sherry who was watching her with a half smile.
Ben Rossi went on. ‘An abo with a sniffer dog would’ve had trouble trackin’ this baby down.’ He spread out a thick cream document. ‘Darcy’s Will.’ He looked up at Jess, as if to gauge her reaction. ‘Old bloke who drew it up popped his clogs some years back. Couldn’t find a copy anywhere. And Joey hadn’t a clue about anything, as per bloody usual. Finally turned up in an old deed box.’ He flattened the document out with the ball of his hand. ‘Oh she gave us a right jerkin’ off, this one.’
‘I thought you were talking about me for a minute,’ Jess said. The whole manner of the man made her edgy. She twisted her watch around on her damp wrist. This damned heat.
Ben Rossi looked up at her again, his face saturnine and serious. ‘Well, now you come to mention it, you led us a right dance too.’
Was that a reprimand? Jess stood by the table saying nothing, hiding her anger under a mask of hauteur. 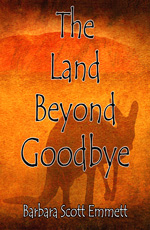 ‘Trackin’ you down was harder than trackin’ a tiptoeing caterpillar over a bare rock. Did you have to move eighteen times in as many years?’
‘It wasn’t that many!’ Irritated at having to justify herself, Jess did so nevertheless. ‘I’ve been in my flat for nearly seven years now.’ She regarded Rossi icily. ‘Most of my moves were years ago. To temporary addresses.’
‘Temporary addresses?’ Ben Rossi leaned back in the kitchen chair, raising the front legs a few inches off the floor. ‘Some o’ those people had never heard of you. Thought the trail was gonna to go completely cold at one stage. Lucky for you we picked it up again. Very lucky for you.’ He looked up at her from beneath thick dark eyebrows. His skin was a light coffee brown, an indoor brown, a natural sallow skin tone, rather than a mahogany tan like Joey’s.
‘Right.’ He dropped the chairlegs down and looked at the Will. ‘Here she is, in black and white. “To my very good friend, Jessica Ann Whitelaw, of blah blah blah, my entire estate both real and personal, whatsoever and wheresoever situate blah blah blah...”’ He paused and looked up. ‘Definitely not what I expected. Thought you’d be much older.’ He ran his eyes over Jess. ‘You must’ve made an old man very happy. Or a happy man very old.’ He turned one corner of his mouth up in what could have been a smile.
‘We were friends,’ said Jess, stiffening. ‘And he wasn’t that old... then.’
‘No need to go on the defensive.’ Rossi held up his hand as if to ward off blows.
‘Please carry on.’ Jess stalked over to the sink by the window and gazed out onto the patch of cultivated soil that was Sherry’s attempt at a vegetable garden. The sun had baked a crust on top through which limp plants had struggled then given up.
‘Right. “My entire estate blahdyblah... excepting only my house at Lovatt Creek...”’ Rossi gestured around the room without looking up. ‘“...which I bequeath to Joseph McIlroy Evans and his wife Sherrilyn Margaret Evans...”’ And now he did look up. ‘Though why anybody’d want to live out here in the back o’ bloody beyond, I don’t know.’ He turned around in his chair and eyed Sherry over his shoulder. ‘Y’can swing that billy now, Sherrilyn.’
Read on :
The Land Beyond Goodbye US
The Land Beyond Goodbye UK
Posted by Barbara Scott Emmett at 12:49